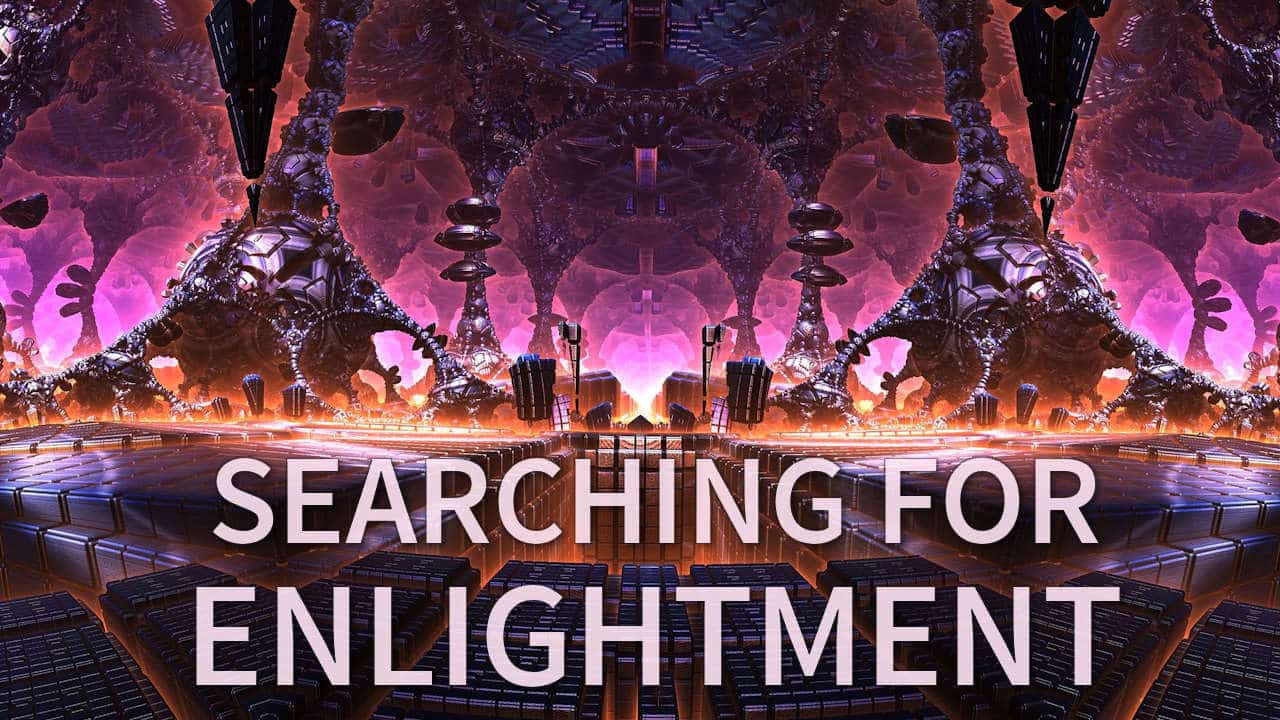 By: Matrixblogger
In: Search for Enlightenment
With: 0 Comments

The series “Search for Enlightenment” reflects my personal work with self-knowledge. I call this series like this, because the concept of enlightenment is more widespread and gives the most immediate picture. Of course, it is incredibly difficult to determine when someone is enlightened or even gets titles like masters or yogis, because honestly, you would never call yourself like that. Such titles always come from other people, such as students or interested parties. Thus, such titling is only a help, but not a real statement. In any case, this series shows a section of my endeavor to achieve a great realization. I always go back to the “System of Probability Fractals”, an arrangement of millions of alternative realities, alien worlds and the existence of different but also related species. There I often meet an old man who helps me and teaches me a bit. This article is the beginning of the big trip and there are many many more…

Just a few seconds ago I was still in my bed, but now I hunted again through the probability fractal and was for a few seconds at a fire site. It was night and the fire blazed. To my left, I saw a man with half-bared, gray hair falling to his shoulder. He looked a little like an Indian, although he looked as European as I did. But I could not really see his face. He looked into the fire as I tried to focus on him. Somehow he seemed familiar, but I did not know where to put him…

“So, you are looking for the great realization?”

Then he laughed aloud and looked at me, grinning, “I could really laugh at you!”

“Why?” I asked him puzzled.

“It is so easy to achieve this realization! A snap, a word from you is enough!”

I can not imagine! I have been wondering since the last few weeks which knowledge this may be. I imagine that it removes me from the maze of everyday reality and the alternative parallel worlds, but I’m not sure. I already perceived the impregnable wall that separates me from the handful of people who have already made it; however they could manage this. I, on the other hand, wander around, and find no way out.”

Again the man laughed. He did not seem to believe me. But, on the other hand, I was convinced to speak the truth. I really felt so, and I could not imagine what he so cheekily claimed. Was he allowed to have fun with me? But when I felt inside of myself, I felt that he was speaking the truth. Was it me, who was wrong here? How could I be wrong in view of the possibility of critically checking myself and drawing conclusions on the basis of my past, which clearly told me that this great realization was not a snap – at least not an obvious one.

“There must have been some, I could feel them outside the maze. There were maybe five people, no more. If it is so easy to reach this realization or enlightenment, I wonder why there have been so few,” I continued.

“It does not matter to tell you what the realization is, nor what it concludes or what it is actually about. Everyone has to reach it by themselves. However, I can show you what you have already recognized and where this can be arranged at all. Perhaps you will discover something that has escaped you so far.”

Before I could happily agree, I hunted back into the probability fractal. There I saw the many thousand realities, including my everyday life, which would in no way stand out in a particular way, it was a world like all the others. All the worlds were the same, and the many paths and roads that I could follow led me from one to the next and back again. An eternal and endless labyrinth of possibilities, realities, probabilities, and that only in relation to the human plane.

Beyond the human level there were other realities. They were alien and I rarely reached them. But at that moment, as usual, I perceived the many human realities, saw me in different cities with different friends, and suddenly I saw my own reality, my personal everyday life. I could observe my everyday life from the air and perceived several sequences from it at the same time. I saw different situations with very many people whom I have encountered so far in my life. I saw how they were conversing, influencing, changing, and doing other things. I now had an ultimate overview of my life.

Then I saw how each one of these people scrambled around in his everyday world, trying to get rid of his piece of the great cake of life with their behavior, feelings, and words. Everyone followed his egoism and stalked for it with all the means at their disposal. I was certainly no exception. But as I looked at it, I remembered that it was a great theater game, the game of life. And everyone tried to gain the great insight in his own way, but in small controversies, or drank around with the distractions that our world now offers. Even those I had encountered and had claimed that they had already advanced so far along the path of knowledge, I found a certain place in the maze. Analogously speaking, most of them were running up and down in one gear, while others had already explored a few side branches, but no one had been able to leave the labyrinth. This made them all the same. No one was better or worse. All their actions were so insignificant in comparison to the infinity of the maze or labyrinth that I realized that it was a game, but I also felt that it felt a part of me as a pity. He did not want to scramble in this insignificant cake, but there was simply no way to get away.

Already through the interaction with other people you automatically participate in this game. There is no other way. I understood why some had decided to live somewhere as a hermit in the mountains, but I knew at the same time that it was just an escape to behave like that. It would indeed bypass the discussion of the game, but it would not be finished. What else should I do to continue my life like all the others? Then I returned to the camp fire and the strange man. He looked farther into the fire and ignored me. Then, a little while later, he looked up:

“Yes, I did. It’s a gigantic game, but it’s also depressing at the same time.” he laughed.

The quiet hope, in the form of a voice of myself, sounded and whispered whether the great realization might not mean liberation from the labyrinth, and at the same time a liberation from this strange theater-play which we humans call life. But no one answered my question. The man looked at me:

“I’m breathing wrong? So, I’ve been doing it all my life, how can it be wrong then? “I replied.

As he looked at me, I felt what he was about to tell me. No words were needed. I had always wondered how people could manage to stay under water for a minute or two without gasping for air. Whenever I had tried it, I got an irresistible urge for oxygen after only twenty seconds. But under his help, I now felt what he wanted to tell me. I followed his instructions and held my breath. I do not want to go into the details now, as I have done well, to shorten this.

At least as expected, the strong urge to get air again came after 20 seconds. So the air pressed constantly back and forth in my lungs with the demand to inhale new oxygen, it became almost intolerable and then I realized that the need of oxygen has nothing to do with the urge to breathe. It was a strange moment, because it was as if two observations were separated from one another, which I had previously misunderstood. Breathing had nothing to do with the pure intake of oxygen. His lesson now taught me to recognize and to see that I was able to put off the urge to breathe quickly.

Suddenly an incredible calm flowed through me. A minute had passed, and I still had not breathed. My desperate urge to breathe had disappeared. As powerful as my efforts had been before, I pumped the no-air in the lungs up and down, but with extreme serenity. I had no need to breathe anymore. Of course, I knew that my body needed oxygen, but I knew now that I no longer needed it. The pressure was no longer there. At some point I quietly left a little oxygen in my lungs. It was a very normal breath, no resolved struggle for oxygen to fill the lungs, as if they had just come out of the water in time. No, everything was quiet. I felt extremely relaxed and relieved. This had been an interesting lesson.

When I opened my eyes, I had long left the fire place and the probability fractal and found myself in my bed again. I had not slept for a second. All this had taken place in my normal state of consciousness. I turned to the side and then got slight concerns as to whether it would be advisable to take a nap after this experience. What if my urge to breathe was now so gone that I would not breathe without my command? Perhaps in my sleep I would not feel the urge to continue breathing and supply my body with oxygen. But as I slowly fell asleep, I felt that there was someone in me breathing, even when I did not notice anything.

(All following parts are accessible by part 1)

Support the Matrixblogger...
Readings 255
2017-01-16
Previous Post: Retrieving: The Ghost on the Toilet
Next Post: Singer Prince talked about Chemtrails before his Death